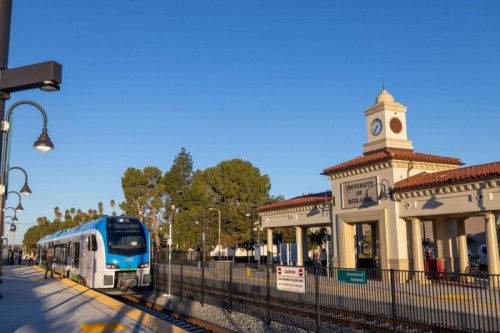 DMU at University of Redlands station_1200x800_PressPage

Planned and constructed by the San Bernardino County Transportation Authority (SBCTA), Arrow will initially operate up to 42 weekday trains between 5:30 a.m. and 9 p.m., with service also available on Saturdays and Sundays. Connections between Arrow trains and Metrolink San Bernardino Line trains are available seven days a week at the San Bernardino-Downtown Station. There are also connections to Metrolink’s Inland Empire-Orange County Line.

“It’s an exciting day for Metrolink and our partners at SBCTA as we take another step toward greater regional train travel throughout Southern California,” Metrolink Board Chairman Ara Najarian said. “Metrolink continues to be a pioneer in environmentally responsible, safe and efficient travel.”

“We are thrilled to open the highly anticipated new Arrow service for our riders in Redlands and San Bernardino,” Metrolink CEO Darren Kettle said. “The Arrow service adds nine miles of new track, giving riders more options for cleaner, efficient travel in the area, connecting to Los Angeles, Orange County and beyond.”

The new DMU trains being used for the Arrow service feature a sleek, modern design and are powered by lower-emission diesel engines for a quieter and more energy-efficient ride. Other amenities include level boarding at the station platforms, capacity for 120 passengers, space for up to eight wheelchairs, storage hooks for up to 12 bicycles and USB chargers at most seats.

“The launch of Arrow is monumental for both San Bernardino County and the Southern California region,” Metrolink Board Vice-Chair and SBCTA Board Member Larry McCallon said. “The effort of SBCTA and Metrolink to complete a project of this magnitude is tremendous. By extending passenger rail service to Redlands with new, modern and eco-friendly trains, the agencies are fulfilling commitments to not only provide Southern California residents with greater regional rail connectivity, but also meet California’s aggressive climate-improvement goals.”

For more information on the Arrow Line visit www.metrolinktrains/arrow.

Metrolink is Southern California's regional passenger rail service providing reliable, safe, affordable and environmentally sustainable transportation that connects people, communities and businesses to greater opportunity. The Agency’s 538 miles of track and 62 stations across Los Angeles, Orange, Riverside, San Bernardino and Ventura counties serve as an essential link in the region’s mobility network, enabling people to connect to their jobs and explore all that the region has to offer. Prior to the pandemic, Metrolink had nearly 12 million annual boardings from people who choose to ride the train to avoid gridlock, removing an estimated 9.3 million vehicles from the roads and reducing greenhouse gas emissions by 130,000 metric tons each year with its fleet of Tier 4 locomotives.