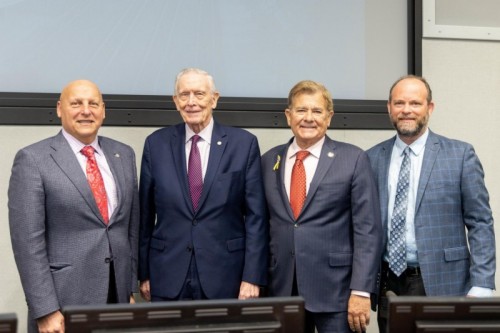 LOS ANGELES – The Southern California Regional Rail Authority (SCRRA) Board of Directors, the governing body of the regional passenger rail service Metrolink, unanimously elected San Bernardino County Transportation Authority (SBCTA) representative and City of Highland Mayor Larry McCallon as its next chair during its December 9 regular meeting. Effective Jan. 1, McCallon, who currently serves as the agency’s vice chair, replaces outgoing Chair Ara Najarian, who will remain on the SCRRA Board as a director, while also serving as chair of the Los Angeles County Metropolitan Transportation Authority (Metro) Board of Directors.

“I thank Chair Najarian for his exemplary leadership over the past two years,” said Chair-Elect McCallon. “I applaud and admire his commitment to enhancing public safety, growing ridership, improving the customer experience and delivering more regionally integrated projects. I look forward to continuing those efforts and advancing regional connectivity projects like we have done recently in San Bernardino County. Those efforts include the new Metrolink Arrow train service between the cities of Redlands and San Bernardino, and the ONT Connect shuttle service linking Metrolink’s Rancho Cucamonga Station with the Ontario International Airport.”

All three incoming officers will serve one-year terms but may serve a two-year term if re-elected in 2023.

“It has been an honor to lead the Metrolink Board and this agency for the past two years,” Najarian said. “I am proud of our work to provide safe and reliable service while advancing our sustainability initiatives and taking important steps toward greater regional mobility. I know incoming Chair McCallon will continue Metrolink’s transformation into a world-class regional rail system.”

“I want to thank Chair Najarian for welcoming me as CEO during his time as chair,” Metrolink CEO Darren Kettle said. “I appreciate the direction and support he has provided to our agency, especially during these challenging times. I look forward to working with the Board’s newly elected leadership as our agency embraces its role as a regional rail system for all train riders.”

McCallon was elected to the Highland City Council in November 2002. He is the current mayor of the city, a position he previously held from 2011 to 2013.

He is a retired local businessman with 18 years’ experience as president and CEO of McFAM Corporation dba McCLEANERS. Prior to retirement, he also directed multi-million-dollar development, production and maintenance programs at the Northrop Grumman Corporation for the navigation systems (star trackers) on the B-2 Stealth Bomber, the SR-71 Blackbird and the U-2 aircraft.

McCallon is currently the vice chair of SCRRA and served as chair in 2014.

First elected to the Glendale City Council in 2005, Najarian has served as Glendale’s mayor for four terms. He first served as a member of the Metrolink Board of Directors between 2007 and 2012 and was reappointed in 2013. During his time as board chair, Metrolink became the first passenger rail agency in the nation to be completely powered by renewable fuel. The agency also broke ground on the Burbank Junction Speed Improvement Project, the first of 21 projects that comprises phase 1 of the agency’s Southern California Optimized Rail Expansion (SCORE) program that paves the way for increased train service ahead of the 2028 Olympics and Paralympic games.

Prior to his appointment as Metrolink Board chair, Najarian served as vice chair for two years. Najarian is also the current chair of the Metro Board of Directors and sits on the boards of the San Fernando Valley Council of Governments and the Hollywood Burbank Airport Authority. Najarian has been an attorney in private practice in Glendale for 30 years.

Berkson was elected to the Jurupa Valley City Council in 2014 and also serves on the Riverside Transit Agency (RTA) Board of Directors. Outside his work as an elected official, Berkson has run his own water conservation business since 1988 and has a State of California General and Plumbing Contracting License. He also works as a project manager for a real estate development and investment banking company in Santa Ana, Calif.

Metrolink regional passenger rail service offers reliable, safe, affordable and environmentally sustainable transportation throughout Southern California. The Agency’s 547 miles of track and 67 stations across Los Angeles, Orange, Riverside, San Bernardino and Ventura counties connect people, communities, and businesses and is an essential link in the region’s mobility network. Metrolink’s Arrow service, which launched in October 2022 with nine miles of track and four new stations between San Bernardino and Redlands, provides greater local and regional rail connectivity. People who choose to ride Metrolink are helping to remove an estimated 9.3 million vehicles from the roads and reducing greenhouse gas emissions by 130,000 metric tons each year.