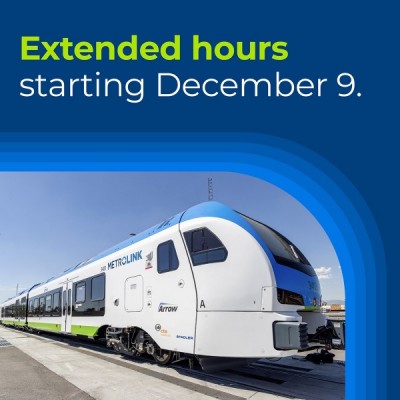 LOS ANGELES - Beginning Friday, Dec. 9, train riders in San Bernardino and Redlands will have more early morning and late-night travel options along the new Arrow route that launched on Oct. 24.

“With the Quiet Zone approved along the entire nine-mile Arrow extension, we are now able to provide a more robust schedule to meet the travel needs of more riders,” Metrolink Arrow CEO Darren Kettle said. “Safety is always our priority, and we appreciate everyone’s patience as we waited for the Quiet Zone to go through the required FRA approval process.”

A Quiet Zone is a section of rail at which locomotive horns are exempt from routinely sounding when trains approach crossings, except in emergency situations. The Quiet Zone along the Arrow tracks in Redlands was approved by the FRA in early November and was implemented on Friday, Nov. 25 after the required 21-day noticing period. The City of San Bernardino received its approval from the FRA on November 17, and the Quiet Zone along Arrow tracks in that city will go into effect on Thursday, December 8.

For more information on the Arrow Line visit www.metrolinktrains/arrow.

Metrolink regional passenger rail service offers reliable, safe, affordable and environmentally sustainable transportation throughout Southern California. The Agency’s 547 miles of track and 67 stations across Los Angeles, Orange, Riverside, San Bernardino and Ventura counties connect people, communities, and businesses and is an essential link in the region’s mobility network. Metrolink’s Arrow service, which launched in October 2022 with nine miles of track and four new stations between San Bernardino and Redlands, provides greater local and regional rail connectivity. People who choose to ride Metrolink are helping to remove an estimated 9.3 million vehicles from the roads and reducing greenhouse gas emissions by 130,000 metric tons each year.