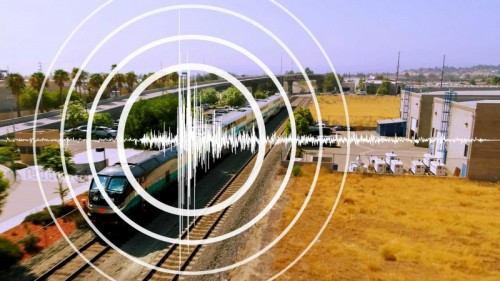 LOS ANGELES – Today, Metrolink announces an important advancement in its Earthquake Early Warning System (EEW) with new technology that automatically applies the brakes for safe and rapid slowing or stopping of trains in the event of an earthquake.

A previous version of the technology that Metrolink deployed in September 2021 had the capability to send automated messages to train crews to begin to slow or stop the train but did not include automated brake enforcement. The next phase of this technology rollout is being tested along Metrolink’s 91/Perris Valley Line between Riverside and Perris and is supported through a partnership with the California Department of Transportation (Caltrans) and the U.S. Geological Survey (USGS).

Metrolink’s EEW is based on an interface between the USGS-operated ShakeAlert and Metrolink’s Positive Train Control (PTC) system. ShakeAlert is an earthquake early warning system that provides important data within seconds of an earthquake being detected, including the earthquake’s origin, time, location, and magnitude, so people and systems can be alerted before shaking begins. PTC is designed to prevent train-to-train collisions, over-speed derailments and other unsafe actions.

“The combination of ShakeAlert and PTC is a true game-changer for Metrolink,” said Metrolink CEO Darren Kettle. “This latest advancement is a reflection of Metrolink’s on-going leadership in system safety and an important milestone in our commitment to protecting our riders, workers and infrastructure.”

The new system will also provide enhanced data to support inspection of the rail network and resumption of service following an earthquake.

“The program identifies where protection is needed on a rail network to safely continue rail operations," said Robert-Michael de Groot of the USGS Earthquake Science Center in Pasadena. "We are excited to be working together to provide real-time earthquake early warning alerts powered by ShakeAlert."

The new technology automatically processes ShakeAlert data and sends PTC messages to trains in the impacted area based on the severity of the earthquake detected. This latest update to the system adds PTC enforcement to automatically stop or slow trains when needed.

The Perris Valley section of the 91/Perris Valley Line was chosen for the pilot test because testing would have minimal effects on freight train traffic.

ShakeAlerts do not predict earthquakes. Instead, an alert indicates that an earthquake has begun, shaking is expected, and protective actions should be taken. After the pilot phase on the Perris Valley Line, staff will evaluate its performance for potential expansion across the Metrolink system.

Metrolink is southern California's regional passenger rail service providing reliable, safe, affordable and environmentally sustainable transportation that connects people, communities, and businesses to greater opportunity. The Agency’s 538 miles of track and 62 stations across Los Angeles, Orange, Riverside, San Bernardino and Ventura counties serve as an essential link in the region’s mobility network, enabling people to connect to their jobs and explore all that the region has to offer. Prior to the pandemic, Metrolink had nearly 12 million annual boardings from people who choose to ride the train to avoid gridlock, removing an estimated 9.3 million vehicles from the roads and reducing greenhouse gas emissions by 130,000 metric tons each year with its fleet of Tier 4 locomotives.